In connection with the current collective exhibition The Ocean of Tuonela (18 June – 31 July) where my series of portraits on fish skin and prints from the series Guet Ndaru Mool are on show, here is another short series of photographs in the same spirit.  This particular series is called Nappkat, which means simply “Fisherman” in Wolof and which I had made already earlier in 2018.

I thought I had come to an end photographing the lives of fishermen in Saint-Louis but it seems that I may well keep working on that theme in some other ways, as documenting life where I live is what I do. I am soon starting a new long term project with photography and sound on urban environment and Saint-Louis being very much urban, fishermen will evidently be part of the project, one way or another. 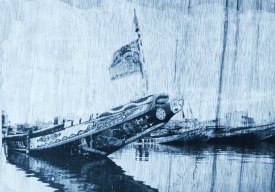 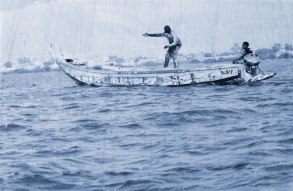 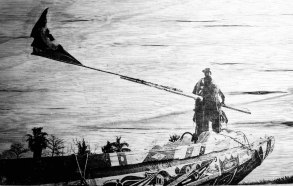 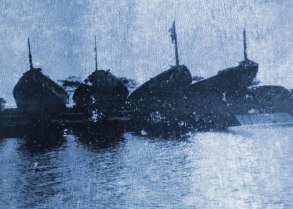 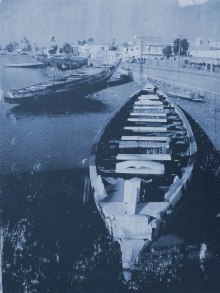 And here’s some ambience from the actual exhibition, which is not only about your works on the walls but the walls themselves, those fantastic walls! 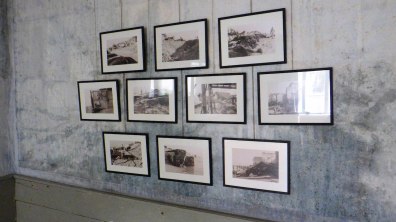 This is one of my most recent image transfers on wood. I have given this series the title Flashbacks From the Future and I won’t even try to explain all the connotations that went through my head while thinking of a suitable title. I somehow imagine myself as a viewer in the far future looking at these photos as something that once was. I get into that same mood for example every time I am in Dakar where I see the city in year 2118, imagining what kind of an overcrowded boiling hell it will be by that time, in its current lack of proper urban planning.

I realize now that this series is allowing my unconscious to play a more important role in the process of making each photograph. I usually work with a topic that I have defined in advance – although it might change in the process – but in this case it was the work that came first and the title afterwords, so in every sense this project appears less limiting in the ways I am creating it. This particular photo was in my selection of work-in-progress that I wanted to show on the occasion of the open house event that we organized at Waaw Artists’ Residency earlier in the week, and the feedback was interesting, as it always is. Some visitors would judge it “bizarre” while others loved it. I myself am thrilled with how this project remains open and I’ll keep working on it in the coming days and weeks. Wishing you all a Very Joyous Christmas & New Year!

“Dive in, close your eyes, relax.”

I asked some of my friends to dive and remain underwater for a short time. When your body is completely submerged by water it often happens that your sense of self takes over for a moment, at least that is my own experience when I’m underwater. I feel at the same time very connected to my body and in a strangely and wonderfully light and easy way more connected to the world and to our planet. The expressions on some of my friends’ faces seem to hint that they may have experienced similar effects, sometimes almost unconsciously!

This is a series of portraits soon to be part of an exhibition – more detailed and updated information on this will follow very soon.

As a child I was warned by this terrible creature that lived in the depths of the nearby river. It would snatch children with his long white arm and eat them. In winter, when my uncles took me to skate or sledge ride with our dog on the river, I was secretly terrified to know that we had but some ice and snow between us and this creature. I could almost see it gliding under the ice right below us and follow us and it was just a matter of time when it would find the opportunity to break the ice so that it would clutch me. This creature was called Näkki.

The Senegal river has its own stories, of which I will publish a photography book later in 2018. Being in Saint-Louis means that you are always in contact with both the Senegal river and the Atlantic ocean and with all the buzz related to fishing. The number of different types of fish is dizzying to begin with – and at times it’s also confusing as the names of different types of fish sometimes depend on who’s saying! You have sipakh, diané, coty, talar, thiof… and many others, not to mention hammerhead sharks or cuttlefish and what not. I am fascinated and quickly absorbed by what is happening around me here: the fishermen prepare their pirogues and leave, or return with their catch, they occupy entire streets to fix their nets, walk on the beach and into the rough sea up to their armpits and set their nets, or throw their nets in the river; there are also carpenters making new pirogues or fixing old ones, welders working on motors, horse carts carrying stuff back and forth between Goxum Bacc and Ndar Toute neighborhoods, boat painters, immense areas where fish is being dried, ice factories, freezer vans and trucks of all sizes, and then of course the fish market frenzy, especially upon the return of the boats..

I have now come to a point where it’s time to show some of my work in this series on Guetndarian fishermen and their boats. A fantastic opportunity to do so opens in June in Kristiinankaupunki (Finland) where we will be running a one-month long artists’ residency and several exhibitions by our guest artists. I know that Nappkat is a series that I will keep alive for as long as I stay in Saint-Louis so I will always make more and more photographs on this topic. The vibrancy of it is not letting me go just yet!